This weekend I tackled Mt. Aix. It’s not well known or well traveled, but it’s a great trail with a spectacular view. 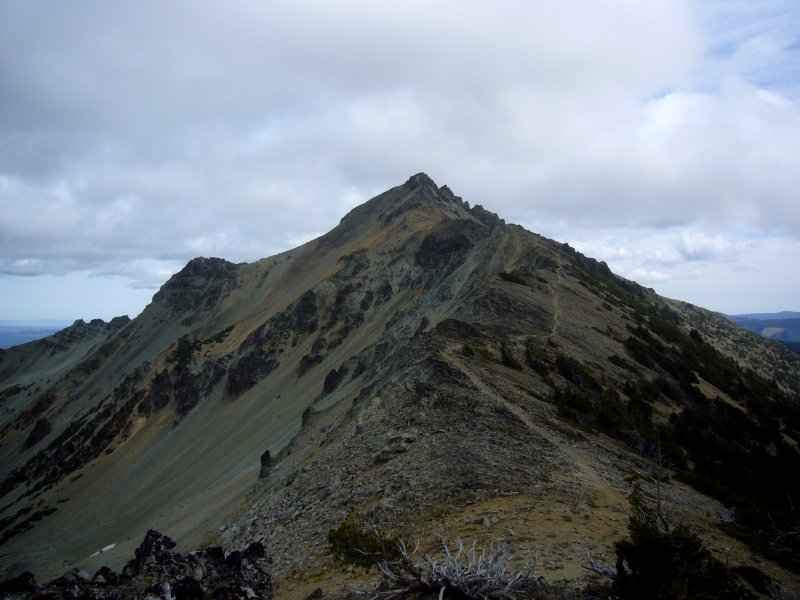 It started at 5:30 when I got out of bed and showered. I was on the highway heading for Chinook pass at 6:30, exactly on time. It was a pleasant drive up there, and despite my own stupidity and a 30 mile detour/scenic drive, I managed to make it to the trail head a couple minutes past nine, which was when I was supposed to meet Nick and Carolyn there. The timing was great. I put on my shoes and backpack, and we started up the trail. It started in the forest with nice soft dirt and gentle sloping. Then it got steeper and we moved into switchbacks. Eventually the trees got thinner and we could begin to see the valley below all the way to Mt. Rainier. There were lots of clouds, so we weren’t able to see Rainier for long, but it was pretty cool while it lasted. We stopped a few times to rest, but made great time. There was nobody on the trail, but there were some footprints that hadn’t yet been covered by elk tracks, which were prevalent. We even heard elk calls on the trail. There were a lot of different birds, and even a friendly chipmunk, but we didn’t see any large animals, though we did see lots of evidence of them.

We made it to the ridge at about 12:30, and took a bunch of pictures. There was frost on one side of the tiny trees, and the wind was blowing fast, but not hard. We continued along the trail, which was sometimes hard to discern, and as we rounded a peak, we found Aix, our destination. We continued along the ridge; it was pretty neat to be looking at two different valleys at once. Eventually the mountain got a lot steeper and more treacherous. I climbed up to the top, but was at times wondering if I shouldn’t be roped in to something, and was well aware that a slip could be fatal. I also knew that since we hadn’t seen anybody all day and didn’t have cell service, if there were any problems, we would be in serious trouble. Nonetheless, I made it to the top safely, and there was a surprisingly large flat area on top maybe 20′ wide. There was a USGS elevation marker and a geocache. I signed the cache, ate my sandwich, and took a bunch of pictures for a panorama composite. Nick joined me at the top. Carolyn had decided to wait lower, which was a great decision. A few minutes later, we started back down. It was exactly 2 pm, which was when we had decided to turn around anyway, so again, the timing was spot on. Then we headed back down.

The hike back down was almost as hard as the hike up. We weren’t going slow before, and it was starting to hurt. Our ankles were tired from the uneven rocky trail, and every step we had to arrest ourselves so we didn’t go downhill too fast. By the end, about 5 pm, we were very happy to see the cars and get shoes off. The trail was about the same elevation change as St. Helens (~4500 feet), but it was a couple miles longer, and we did it in about 7 1/2 hours (St. Helens was 10, but we took a lot more breaks on that).

I followed Nick and Carolyn back, and we stopped in Sunnyside after we headed to a brewery called Snipes Mountain Brewing. The food was pretty good, and so were the ales, but anything would have tasted good then. As an aside, the amount of technology that I have on my phone never ceases to amaze me. We didn’t know where the brewery was. Carolyn called me to ask. I got on the internet and looked up the address, then looked up the driving directions. I called her back and she plugged the address into their GPS, so they had the directions, too. We drove straight to the place without any problems, or even slowing down. After dinner, Nick and Carolyn continued home, and I stopped for gas before heading back to my apartment.

It was a great day trip, and a really good and rewarding hike. The view was amazing, and there were so few signs of humans. We didn’t see a single person on the trail the whole day. I’m a little sore now, but not bad at all, and I’m excited for the next big mountain we tackle.