Last night was a wine party and barbecue. The wife of a friend and coworker works at a winery nearby, and every year employees have access to all the bottles that have been mislabeled or unlabeled at ridiculously low prices. They can get up to 15 cases (that’s 12 bottles per case), for $15 dollars each. She then sold us those cases at cost. The cases were mostly random; she works at a wine conglomerate that represents a few different wineries, so we had some variety. The point of the party was to get our cases and trade bottles with each other to get closer to the cases we wanted. First we had a barbecue and did some wine tasting.

I am horrible at judging wines; I couldn’t tell any difference between three of the four reds, and it was especially astonishing that they ranged in price from $10 to $75 per bottle. I don’t particularly like reds anyway, so I wasn’t too disappointed in myself. But I also wasn’t very good at blind tasting the whites either. I didn’t correctly identify any of them. Oh well.

In preparation for the barbecue, I spent part of the day in the kitchen working on my first lemon meringue pie. I had no idea how complicated it would be. The pie crust, meringue, and filling each required many steps, and some of them had to be done very close together. To confound matters, the recipe was split across three separate sections of the cookbook, so I was flipping back and forth. In the end it all came together, and when it went into the oven it looked fantastic. Then I tasted the filling and meringue in the bowl and got a little worried. There was a strong aftertaste of corn starch. It came out of the oven looking even better: 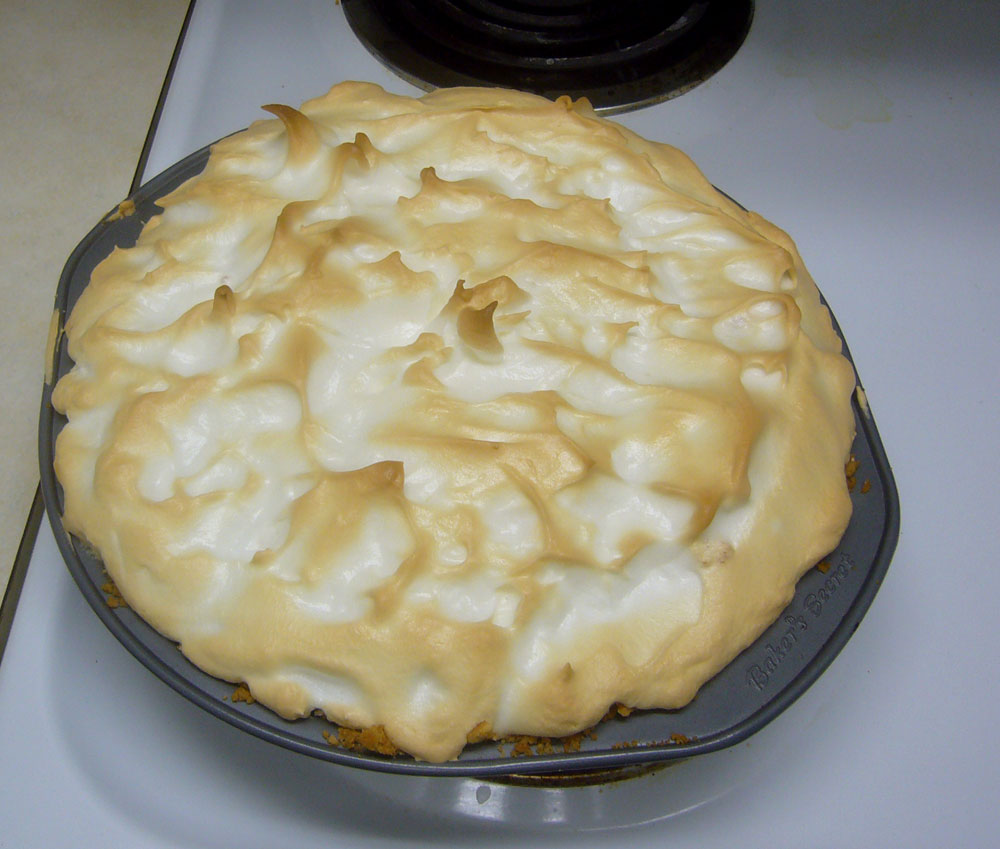 I let it cool for a bit, then put it in the fridge while I went to work for a while. Then I went to the wine party, and after we ate, I cut it up to discover how tasty it was. There were more people than I expected, so the cake had to get split into 14 slices. The thinness of the slices made the filling have a hard time staying together. That’s just an excuse, though. I should have boiled the filling a little longer so it would retain its shape. So it wasn’t the prettiest slice of pie, but the meringue part turned out great. And the taste more than made up for the presentation. The corn starch flavor was gone, and it tasted exactly like it should have.

In the future I’ll be doing the filling a little longer so it retains its shape better, but other than that, it was a great pie.