On Memorial Day I traveled with two coworkers to San Antonio for a project. I’ve been working on some emergency management software for the Air Force, and we were going down to demo it for them and hopefully get a decent chunk of money to continue working on it. We had an early flight, and I arrived at the airport with my ticket 30 minutes before it was scheduled to leave (in other words, in plenty of time considering the Pasco airport). Unfortunately, the TSA guy checking tickets and IDs was an old man more interested in conversation than getting any actual work done, and though both x-ray lines were open (which I’ve only seen a couple times), the line was backed up pretty far. I made it through the line and got directly on the plane, giving Gariann a few gray hairs in the process as she got worried that I wouldn’t make it in time.

The flight to Denver was a lot of fun as we descended. For many miles we skimmed along right above the cloud line. It was like flying a couple feet above rolling hills, and occasionally we would go right next to a high standing cloud and it felt like we had narrowly avoid running straight into it. The flight from Denver to San Antonio was less interesting, though it was unfamiliar territory. As we exited the plane the oppressive humidity hit immediately. We made our way to the rental car and proceeded to get lost. Dave’s GPS couldn’t find the place, and my Google maps gave me completely wrong directions. Fortunately, we called the hotel and asked for directions after I directed us only a couple miles in the wrong direction. Bad Google. No no. 🙂

We checked in to the hotel, which was in the middle of nowhere, then met back downstairs and went out for a late lunch. We drove over to the Rudy’s BBQ place near Sea World. It was an interesting experience, but the ribs were good. After that we stopped at a Bass Pro Shop for Dave and explored that for a bit before going back to the hotel. I watched TV for a while, then accidentally fell asleep. I woke up completely drenched in sweat about an hour later. It was about 8, and I was hungry again, so I called Gariann and we went to dinner at the Cracker Barrel right next to the hotel. Then I went back to bed for good.

Up at 5:45 Texas time, I got ready and met Dave and Gariann for breakfast downstairs, and we drove about half an hour to the base where we would be doing our work. Fortunately, Tuesday was just for us to listen and watch, so I paid attention and watched the demos of the other software and listened to the discussions without saying anything. The other two were the program managers and military liaisons; I was the technical guy who made it all work. After the meetings all day, we went back to the hotel and changed, then met some of the other military folks at a different Rudy’s; this time I got a full rack of ribs. Back in the hotel we practiced our demo some more and I made a couple improvements to the software before going to bed.

Wednesday morning I woke up at 5:45 again and brought my things downstairs for breakfast. We stopped at Starbucks for some large containers of coffee for everyone (except me), then were praised as we delivered the coffee to all the military guys. The first part of the meeting was demos by other guys, and I took the opportunity to prepare for our presentation. When it came time for us, we got up there and ran through our demo with only a couple hiccups that actually were to our advantage. Dave was doing most of the talking as Gariann and I walked through the software, but at the end I had a few minutes to present a separate but related project that I also work on. After our demo was lunch, and we had some interesting discussions with some of the guys about our software that will probably lead to more work.

After the meeting we were done, so we went back to the hotel and took a nap. At about 7 we met up again and headed downtown. I had convinced the others to go down to the riverwalk, since I had never been there and hadn’t had a chance to do any sightseeing. Parking was odd. We stopped at a parking lot and there was a guy there who charged us $10 to park. I handed him a $5 and 5 $1s. He handed us back a $10 bill. I was thoroughly confused, but none of us were about to correct him. So we parked and got out and headed for the riverwalk, stopping to see the Alamo on the way. It was closed, so we only got to see the outside, but it was still pretty neat. Then we continued on. 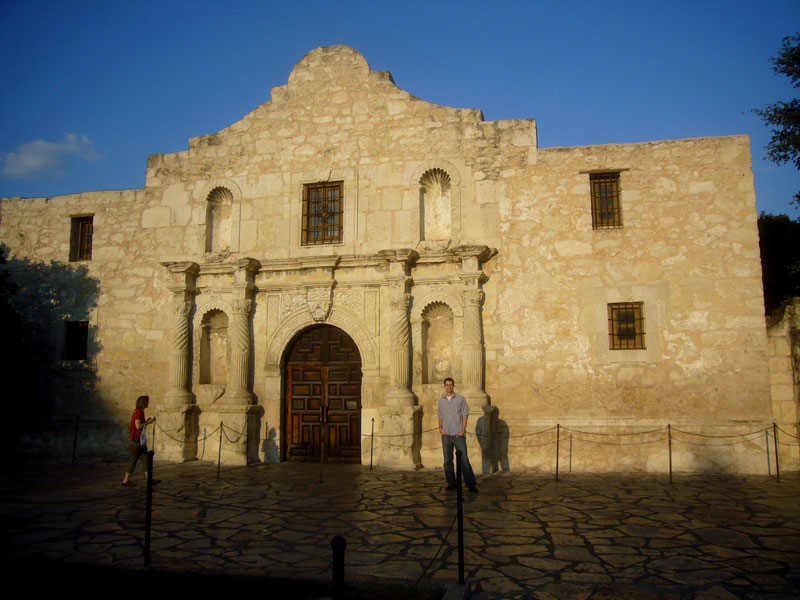 The riverwalk is fascinating. It’s probably best described as Texas’s version of Venice. It’s a single river with small boat tours and walkways along both sides with many bridges connecting the two sides and restaurants all along the way with tables outside. We sat down for dinner at one restaurant and I watched people go by as we ate. Then we wandered up and down the walk for a while exploring, and finally stopped for ice cream on the way back.

Thursday morning we were up early again to get to the airport for our flight. We checked out, then headed back to the airport. Unfortunately, it wasn’t that easy. We didn’t see a single sign off the highway and ended up passing it. So I checked Google maps on my phone for directions and directed us to what didn’t seem quite right and ended up being completely wrong. It took us to the cargo terminal on the other side of the runway! It was very embarrassing for me to be wrong with the directions again no thanks to google. Usually I’m a huge fan of Google, and I love having Google Maps on my phone, but in San Antonio it just didn’t work out so well. We still made it to the airport on time, but none of us appreciated the scenic route around the whole airport.

The flights back were unexciting, and my efforts at sleeping were foiled by annoying passengers. After I returned to Pasco at 1:30, I went directly to work and had a meeting at 2:30. Then I was in meetings until 4:30, when I left to go home and change before softball practice. It was a really long day.