With only a couple weeks before Halloween, Erin and I still hadn’t made plans for Halloween. We had options in both Olympia and Richland, but neither of us wanted to be in our home towns, hoping instead to find something fairly large and fun somewhere else.

In a parallel story, I was working on going to Chicago for a conference. The same company that had sent me to San Diego was now preparing for a conference in their home town of Chicago, and had expressed an interest in bringing me there not only to attend the conference with them but also get familiar with their offices and meet the people with whom I may have worked to integrate our software. It was a pretty important conference on emergency management called TCIP (Technologies for Critical Incident Preparedness (http://www.ctc.org/)), and was essentially an opportunity for government, corporate, and emergency response people to get together and talk about needs and what technologies can fill those needs. Anyway, it was the perfect conference for me to attend for a variety of reasons.

Our parallel stories met in a moment of clarity when it occurred to me that the conference ended a day before Halloween, I have friends in Chicago I’d love to see and who would gladly put me up for a night, and there was no reason Erin couldn’t come, too. So I made my plans to go to Chicago for the conference, and she made her plans, and she arrived the second day of the conference. During the day I attended the conference, and she went off and explored the city and a couple graduate schools she was interested in. In the evenings we had dinner and explored the city some more. I was lucky enough to get a hotel room at the Hyatt Regency where the conference was being held and had a great view that included the river, the lake, downtown, and even Navy Pier: 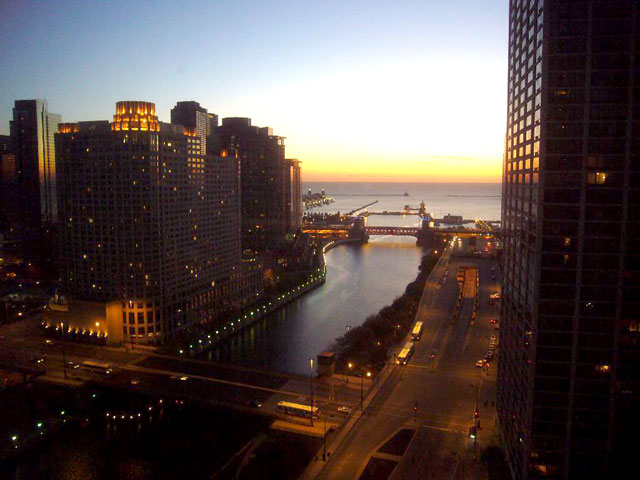 On Thursday night we went out to dinner at a nice restaurant called Catch Thirty-Five, then saw Wicked, which was amazing. Afterward we met up with Adam and Sarah at the Signature Room on the 95th floor of the Hancock Tower and had a great view of downtown at night. It was really handy being downtown because we could either walk or take a taxi anywhere we needed to go.

Friday the conference was winding up and by noon was over. Before I finish with the conference, though, there was something really cool about being there. There were screenshots of software I had written in four of the booths there. One of them was a client using mobile software in San Diego. Another was a group visualizing sensor data in Los Angeles. A third was the PNNL booth showing off some mobile stuff and some visual analytics stuff. And the fourth was a DHS booth showing off more of the same research from PNNL. It was really cool to be able to go up to those booths and see the screenshots and introduce myself (some of them I’d only ever exchanged emails). I was able to do work on a few different projects while I was there, get some good ideas, and attend a lot of the conference sessions that were really relevant. In some cases I think I even had more expertise than the people presenting. I guess that’s a sign that I should be getting more of my knowledge out of my head and into papers and conferences and not just software. Still, the conference was a very good thing for me to have attended.

After it ended, I had arranged to go down to the offices of the other company to meet them and show them some software and answer their questions. It was an interesting demo, full of technical… challenges. I managed to delete a database moments before the demo, which caused some problems, but fortunately I had a backup. It wasn’t a full backup, though, so there were some issues, and some things required being behind the PNNL firewall for it to work. Unfortunately, the lab was going through a bit of a crisis at the time, and had cut off most of the internet access. Still, I managed to show what I wanted, answer their questions accurately and completely, and even get them interested in some more parts.

After the meeting, Erin and I met back up, then went to the pier to see it and get a hot dog, then walked back to get ready for the night. We met my friends for dinner late at a place called Greek Islands Restaurant, where we all stuffed ourselves pretty well. Then it was out to Wicker Park for some drinks and bar hopping. I had my Napolean Dynamite costume with the wig and hair, and Erin was a medieval peasant:

The quality and number of costumes was astounding. We had so much fun going from bar to bar, seeing everybody dressed up and having fun together. Some really elaborate costumes that had to have taken countless hours of construction. We made our way to most of the places in the Wicker Park area, pushing through throngs of people. It was getting late, and the others decided to leave, but Erin and I stuck it out for a while longer, but not much. Then came the inevitable closing of some of the bars, and that meant all the taxis were being snatched up. We spent a long time looking for one. Eventually we decided to pick a main direction and start walking, thinking that if we got out far enough we’d find an open taxi heading into the throng before picking someone up. Ultimately, it worked, and we got back to the hotel safely.

The next morning I had to check out of the hotel because it was for the conference, not my weekend vacation. We left our bags at the desk for the day and took a bus up to Lincoln Park, where we first looked for a place to have some brunch and happened on the most fantastic place ever. It was a buffet brunch that obviously catered to the Friday night partiers. The place is called Stanley’s Kitchen and Tap, and it was amazing, and we weren’t the only ones who thought so. The place was full of people who looked like they were recovering from a long night.

After brunch, we went back to Lincoln Park to see the zoo. At first we only saw the farm animal section and were quite unimpressed, Erin having grown up on a farm, and me having grown up in Montana. Surely that couldn’t be all to the great Lincoln Park zoo. We continued our exploration of the park and thankfully found the rest of the zoo, which turned out to be pretty cool and bigger than we expected. 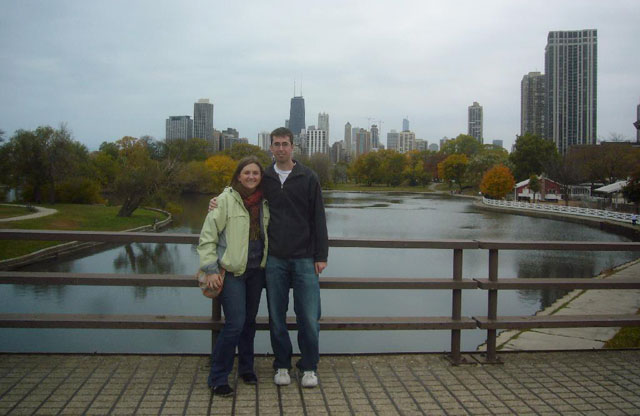 After the zoo we sat down for a while and planned the rest of the day. We didn’t have a hotel room, we wanted to inconvenience Adam and Sarah as little as possible, we wanted something cheap, and we wanted something convenient to the L. We tried a few hotels, we tried a few hostels, and we did some hard looking, thanks mostly to Google Maps on my mobile phone. Sadly, we came up with nothing, though. In the end we called Adam and he was more than happy to have us for the night. We took the bus back to the hotel to pick up our bags then got back on the bus to go to Hyde Park and Adam’s place.

Once we arrived we chilled for a while. Erin took a nap while Adam and I watched a movie. We played some Mario Kart, too. Sarah was at a conference, and when she got back she had to prepare for an evening party as part of the conference. We planned for her to go to that while Adam and Erin and I went to dinner, then we’d pick her up and go to a nightclub. I donned my Napolean Dynamite costume and we headed out. Sadly, all the places we tried to go to eat were closed, and we spent over forty five minutes looking for a place to eat, finally settling on a place that sold pizza by the slice in a part of town I could never find again. Sarah gave us a call when she was done and we returned to pick her up. Then it was off to the club. We picked Excalibur because it had everything in one place, and since it was cold outside we really didn’t want to be doing a lot of traveling. It was a good choice. The main dance floor was just ok. We went up a few floors and across the hall to the techno floor and spent most of our time there. We also meandered down to the other stage on the first floor, but didn’t stay there long. Mostly we were in the techno section. Even though it was the day after Halloween, people were still dressed up in their costumes, and it was again a lot of fun to see everybody dressed up. There was also a breakdancing circle at one point, and I was lucky enough to be near it, so I jumped in and did some Napolean dancing in my costume, to great effect. Sadly, I think I was the one there with the best skills to offer. The other people who tried the circle weren’t nearly the caliber I’d expect in Chicago, so I was a little disappointed. Meh.

One observation I’ve made about noisy clubs is that my cell phone is great for communicating. Rather than yelling into other people’s ears, I’ll just type a message and show it to them, then hand them the phone and they’ll type a response. Since my phone has a full keyboard and touch screen, it’s easy and fast to type or draw pictures. The other huge benefit, and I’ve great responses to this, is to type out my drink order before I get to the bar, then just show them the screen when they get to me. No yelling, no confusion, it’s fast and easy and you can order more complex drinks than the basics. It’s really a win-win.

The four of us seemed to be done with the club all within 15 minutes of each other, so none of us felt bad about leaving; it was just unanimously time to go. We made our way out and headed back to Adam’s where we crashed in the living room. The next morning Erin and I both had fairly early flights, so we called for a taxi to get to the airport and let the others sleep in. We got through security with no problems, and I walked Erin to her flight and said goodbye, then headed to mine.

It was probably my best Halloween so far, and a really good conference, and I love Chicago, so I don’t know how the experience could have been any better.