This weekend I was busy. Saturday morning we went to the raceway in West Richland to watch some friends autocross. They weren’t scheduled to go until later, though, so we stayed for about an hour, then headed to another engagement; the Tri-City Wing Wars.

The Wing Wars was a competition among local restaurants to see which one had the best wing. For $5, anyone could enter and have access to unlimited wings from any of the stations, all of which hid their logos and their brand name. People could vote for their favorites, which would be revealed at the end.

In reality, more people showed up than they expected, and they ran out of wings after about an hour. Sadly, I was one of the reasons they ran out. I managed to consume two dozen chicken appendages in that hour, though to be fair I didn’t target my consumption at any particular vendor, though the Parmesan wings were my favorite. I saw a few friends there, but after the wings ran out, so did we, heading back to the track to see if we could see the friends race.

We arrived in time, and Ricky offered to let me ride with him. He has a nice convertible, so I was happy to accept. The helmet, though tight, wasn’t the claustrophobic experience I expected, and having the top down held the heat and gas smell at bay, so I was quite comfortable. The racing itself was a lot of fun, and I felt like the entire time we were pushing the car to the very edge of its capabilities, and that if Ricky pushed it any more or less expertly, we would certainly spin out. It felt like we hit every cone, but in fact he had a great race and only hit two.

Later, Naomi raced with Ricky, which was fun to watch, and we could all hear her screaming (we assume with joy) occasionally.

Finally, Dan was up, and he let Erin ride as his passenger. She put on her helmet and joined him in the car, a very sporty little thing into which Dan had obviously put a lot of care. I climbed the lookout tower and caught the ride on video; it turned out to be a great run, netting him first in his class for the day.

After the autocrossing, we went to our friend Dimple’s house for pizza and a movie, then went back home.

Sunday morning, I was up early. I had planned to go hiking with Jim and Erin that day, but Erin bailed at the last minute, citing work. Jim and I still went, and it took about an hour to get to our destination; the white bluffs of Wahluke wildlife reserve. We chose a path that wasn’t exactly the famous white bluffs but less traveled. Half of our walk was on an old blocked off road, and the other half was along coyote trails that were barely visible. Along the way we could see the whole Hanford area. 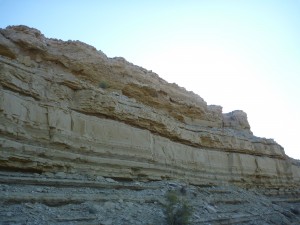 Along the way was an old earth mover. The handle wasn’t attached to the door, but it was easy to insert and open. The key was lying on the cab floor. The battery, however, was dead. Still, it was good for a photo. 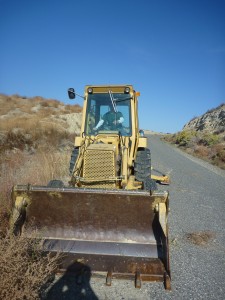 I took a few panos on the hike, too.