Last night I was invited over to a friend/coworker’s house for dinner. I love going to his house because he and his wife are smart and we can talk about all kinds of things, and their house is cute, and the food is fantastic. This time was no different. There were six of us, and for the first hour we talked and ate from the vegetable plate while we waited for dinner to cook. Eventually, after setting off two smoke alarms, the main course was done, and it looked good. It was a mammoth chunk of salmon wrapped in red onions and spinach, and all covered in a sort of pie crust, looking a bit like a tasty pillow. It was served with leeks and broccoli and rolls, and it was delicious.

After dinner we talked for a while, then brought out the cheesecake. I had prepared the dessert, and if I must say so, I did a FINE job of it. I’ve wanted to try a cheesecake for a while, so this was the perfect opportunity. I had to go out to get a spring form pan. Making the cake wasn’t really that hard. It took a little longer than the recipe said it would, but it was my first time. I split the filling in half and added some chocolate to half, then poured the chocolate half in and the white half on top, swirling gently to get it to look right. I followed the directions exactly, and was very happy that the cake didn’t crack at all. While it was cooling I made a nice chocolate sauce and put it in an old mustard bottle. When we served the cheesecake, I added a little bit of the sauce to make it a little more presentable, and for my slice they pulled out a candle for me to celebrate my birthday. Here is what it looks like, but the picture hardly does it justice compared to the taste: 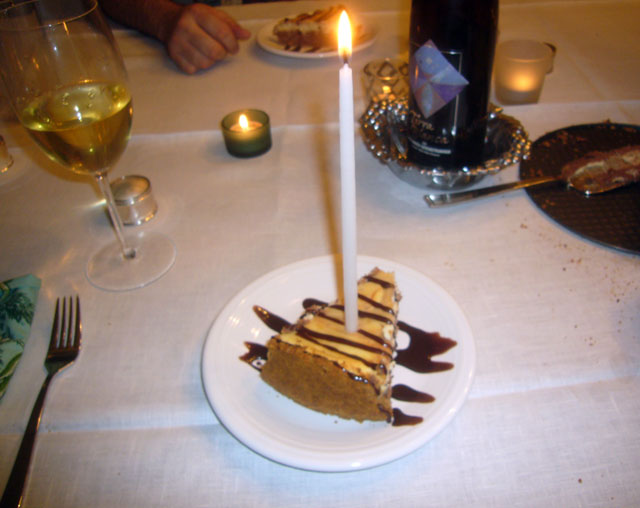 After dinner we talked some more, then went downstairs to watch a couple ancient videos of the Hanford area and the nuclear scare, like Duck and Cover. Then the party was over and I came home with a few slices of cheesecake left.