This year I played a prank on the whole building. It happened in two parts. The first part was more of an anti-prank in that it was actually not a prank at all but everybody thought it was one. Here’s what happened:

The night before, I made a cake. A nice white cake (from scratch) with frosting (also from scratch). I put lettering on top that said “Happy April Fools!” in bright blue. 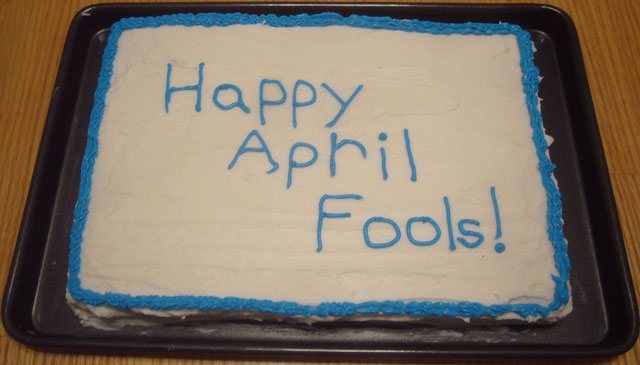 I brought it in to work the next day and kept it in my office until mid-afternoon, when I figured people had returned from lunch and were in the mood for some cake. I sent an email to the entire building saying there was homemade cake in the kitchen to celebrate April first, then set the cake out there. I had saved a couple pieces for myself so that I could try it and so that the cake would have been started and everybody would continue to cut into it.

Surprisingly, it took all of 30 minutes for the cake to disappear. When I was putting it in the kitchen people were asking me what was in it, telling each other they didn’t trust me, wondering if it had toothpaste or some other unnatural cake ingredient. I didn’t say anything to them other than that they should have a piece. Back in my office people were messaging me asking if there really was cake in there (not wanting to be fooled into thinking there was a cake that didn’t exist), and asking me if there was anything wrong with the cake. There really wasn’t. It was a pretty tasty cake. But watching people’s suspicion was hilarious.

Once the cake had been consumed, I sent out a second email to the building. This was part two of the gag. It said that the first cake had been consumed and that the antidote cake was now in the kitchen, but it was half as big as the first, so they should hurry. I got a few replies back that it was funny, and a few people went to see if there really was a second cake. This time there wasn’t a cake, because there was no need for an antidote (and I was baking the first cake late at night and didn’t have time to do a second).

In all it was a pretty innocuous prank, but in an office environment playing a prank on an entire building without getting in serious trouble is very difficult. The cake was really good, and people appreciated it. I’m pretty happy with the way things went, and a lot of people got a good laugh out of it.