My last two pans of brownies have been my best ever. Modesty has no place in describing the awesomeness of these batches of cookie/cake goodness. If I had scaled up production, I could have created world peace.

The first batch was on Easter where we cellebrated the new . I was invited to an early Easter dinner on the morning of, and asked to bring dessert. By the time I got home, I had only an hour to make a dessert, clean myself, and drive 15 minutes over there. Frantically looking through my recipe books, I found that all of the desserts had 20 minutes or more of prep and 40 minutes or more of baking, with another hour or more for cooling. Fortunately, a butterscotch brownie recipe required only 10 minutes of prep and 30 minutes of cooking, which would have it coming out of the oven the minute I was leaving. I hurried through the recipe and poured it into a round cake pan and into the oven. I cleaned myself up and got dressed, then made a nice white vanilla glaze with butter and powdered sugar and vanilla. I already had a chocolate glaze from the cheesecake a few weeks before, but I wanted to have the black and white sauces to play with in the presentation, especially since the brownie was a very light brown (it didn’t have any chocolate in it because it was butterscotch), so the black, white, and light brown would work out well. A quick stop at the grocery store on the way for vanilla ice cream, and I arrived right on time. After dinner I went into the kitchen to plate the brownies. I put a slice of brownie (which was still warm from the oven) onto a plate, then put two round scoops of ice cream on the plate next to it. I heated the sauces in the microwave for a few seconds, then drizzled them over the brownie and ice cream. Here’s a photo: 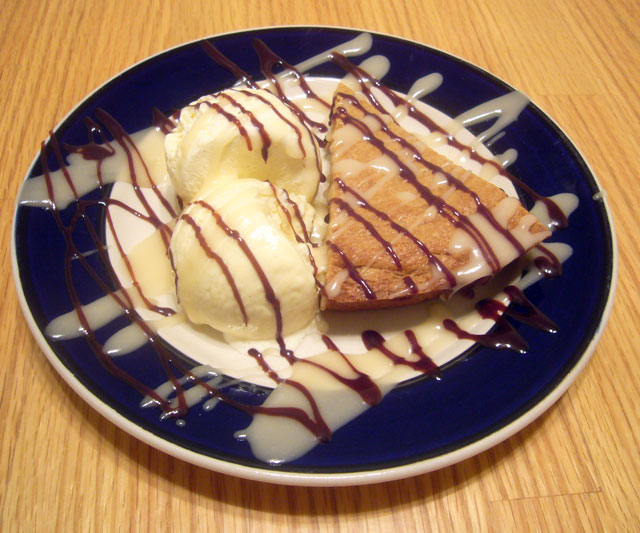 It went over pretty well.

Last night I made the second pan. I had promised the group admin at work that I would bring in brownies this week for her. I wanted to make something besides regular brownies, so I found a recipe that had cream cheese filling and nuts. I made the brownie part, then I made the cream cheese part, which had cream cheese, sugar, eggs, and vanilla. I poured part of the brownie mix into the pan, then the cream cheese mix on top of it, then finished with the rest of the brownie on top, careful to cover all the cream cheese mix with the brownie. I took it out of the oven at just the right time: when the toothpick doesn’t quite come out clean, so it’s still moist, but it’ll cook for a little bit longer after you’ve taken it out. I brought it in to work and offered it to coworkers, brought it in to meetings, and distributed it to all the admins and other people who might come in handy when I need a favor fast. It’s fun to cook, fun to see other people enjoy your food, and it’s saved my butt a few times when I needed paperwork handled or something done. It’s also good for getting people to remember you. Anyway, this batch of brownies went over really well. I got a few emails from people amazed at how good they were. I’m eating one now and I can say it’s way up there on the list of best things I’ve baked.

I apologize for the bragging, but I was very proud of my latest brownie attempts, and they were completely from scratch and weren’t your standard chocolate brownie. These were GOOD.