A few weeks ago I went to Boston for a conference. I hadn’t really been to Boston before (at least, not that I remember. I think I went when I was a lot younger), so I took the opportunity to travel a few days early and explore the city. As an added bonus, my friend from way back in high school is living in Boston, so I had a place to stay, a tour guide, and a great opportunity to catch up with a friend.

I flew early on Friday, May 9 to Boston, and had no trouble navigating the T to get to within a few blocks of Katie’s apartment. Her husband Tim was travelling to Seattle for a wedding, so she was glad to have company while he was away. We met up and I dropped my stuff at her place. We chatted for a while, then went to a spanish tapas place a few blocks away for dinner. It was mostly really tasty. I like to order risky dishes, and sometimes it works out very well. This tapas place was good. Our next stop was an irish bar nearby, where I had some Sam Adams seasonal, and we chatted for a couple hours.

Saturday we went to some museums and did a lot of walking. First was the Museum of Fine Art. It did indeed have a lot of fine art, including some of my favorite french impressionism. So Paris, Chicago, and Boston all contain my favorite artists and most memorable pieces. It was a large museum with many exhibits, so after a couple hours we were a bit exhausted. We wandered around searching for lunch and finally found Bertucci’s. A few blocks away from the MFA was the Isabella Gardner museum, which was the former home of a very rich woman who collected a lot of art and opened the lower floors of her mansion up as a museum and specified that upon her death the museum would remain exactly as she had left it. It was a neat place.

We meandered back to the apartment and collected ourselves a bit, then went out to dinner nearby at a place called Fireplace, which was a really nice restaurant that had good seafood. I had grilled bluefish, and really enjoyed it. We had some really good cheeses and a strange sausage as well. But looking at the wine list I realized we have it really good here in Washington. Back at the apartment we watched some british tv, then called it a night.

Sunday morning we went out to downtown Boston to do what is known as the Freedom Trail, and is essentially a painted red line that takes one on a hike of a couple miles past many of the most famous sites in Boston. Katie was a great tourguide as we went to each place on the trail, and it was amazing to think that each of those places was hundreds of years old and that these were the places that we had learned about in history and are so important to our past. It was really cool. A little sad, though, considering our history is only a few hundred years old and over in Europe they work in the thousands of years old. Oh well.

Lunch was a little Italian place in North End, where the food was excellent and the portions were gigantic. It was a great meal.

The last stop for us on the Freedom Trail was the USS Constitution. We joined the guided tour and got to see the various decks and struggle not to hit heads on ceilings below. 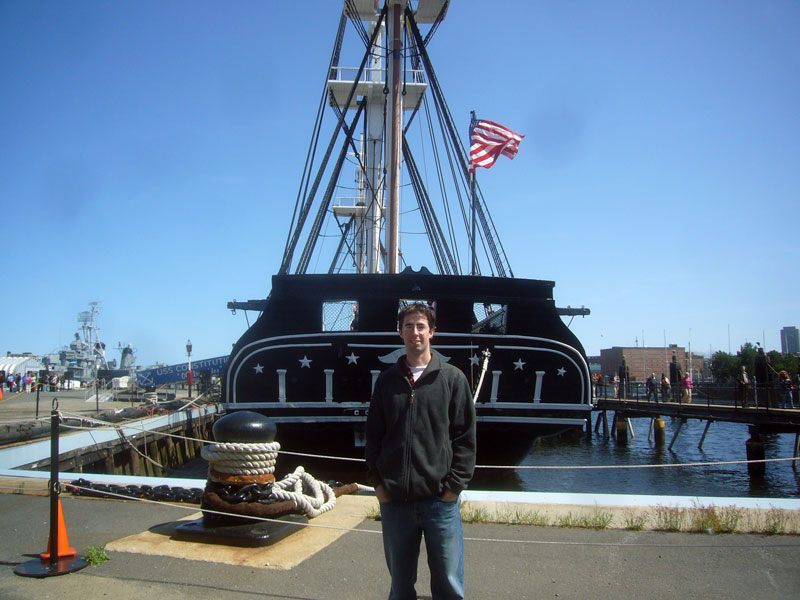 After we got back, Tim had returned from his trip, and they gave me a ride to my hotel in Waltham. I dropped off my stuff and they brought me back to the nearest T stop and left. From there I went to Cambridge and explored for a while before meeting my friend Dennis and his friends for dinner. We ate at a local bar and talked for a few hours. Then I took a cab back to my hotel and prepared for the conference the next day. My hotel room was huge. For some reason I was given a suite, so I had two bedrooms, two baths, a living room with a large flat screen tv, and a full kitchen. It was WAY more than I needed, so I closed off one of the bedrooms so they wouldn’t have to do any cleaning in there.

Monday was the conference, and there were a lot of interesting sessions to attend. In the evening was my poster session, where I presented one of my projects writing software for mobile devices used by law enforcement. It went well, and my posters looked fantastic.

Tuesday didn’t go as well. There were still a lot of sessions that interested me, but it wasn’t long after eating that it started to disagree with me in a bad way. I made to the end, but hastily went back to my hotel and proceded to writhe in misery throughout the night, barely sleeping and hurling more than I thought possible in the middle. I had planned to do a lot of work Tuesday night and then explore Boston more on Wednesday, but morning came and I didn’t feel like going out. Eventually I made it out by checkout time and took a cab to the nearest commuter rail station, where I took the train to the T, then took the T to the airport. I was a few hours early, so I had some lunch and caught up on some TV episodes I had been missing (yay for getting internet on my laptop through my cell phone).

The flight back was uneventful, and I made it home late Wednesday night.

The first part of my trip was great. I really liked Boston, though it’s definitely not my favorite city ever. It was nice catching up with Katie, and I’m glad I had her to show me around.