Saturday morning I went to bed at 2am and got up at 6am. I finished packing for the trip and waited for Doug to pick me up. We all met at Nick’s house, then the eight of us went in two cars down to Eagle Creek, which is in Oregon next to the Columbia River near the pleasant town of Hood River. We stopped in Hood River for bagel sandwiches before we finished the drive. It took a minute to find a parking spot, but we found a place and got all our gear together, then started the hike at about 12:30. The whole hike is through a canyon next to the creek, passing by, over, and even under tributaries to it, and passing from side to side over bridges. The hike itself was easy; very little elevation change. Even though my backpack was full, I was having fun on the walk and had extra energy.

We stopped a few times to let others catch up, and there were a couple stops where the view was amazing; one bit had a sheer wall over 150 feet high, and we could look straight down into the pool of water and see the bottom of the turquoise river. Eventually we made it to tunnel falls, 6.5 miles into the hike. The trail meets the waterfall and goes behind it through a small tunnel. It was loud and there was lots of spray. We took a bunch of pictures. I tried a vertical panorama, and it turned out pretty well. The picture below is a very very small version of it. 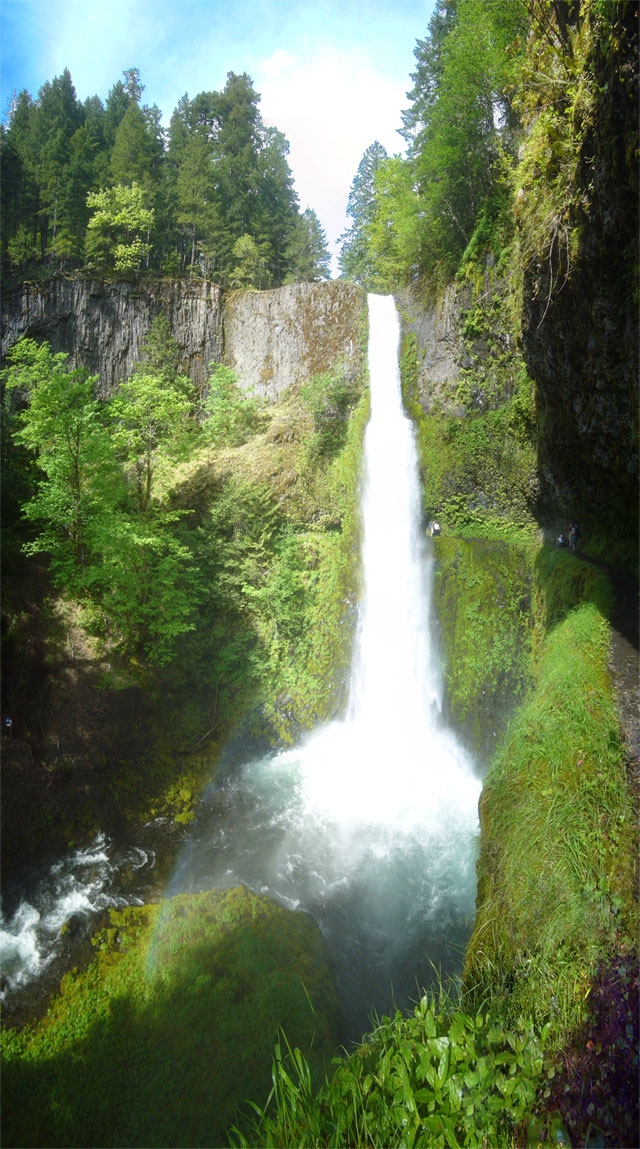 Some of the others were getting tired, and we hadn’t found our campsite yet. There was a rumor that the campsite we were planning to stay at further up was taken by boy scouts. I had tons of energy still, so Nick, Ryan, and I went ahead while the others stayed and rested. For a little bit I was even running with my pack. We passed a few more waterfalls, including one that split into two streams and then one went under the other. The few campsites we found were taken, though, so after a mile we turned around and went back to tunnel falls and met the rest. Then we walked back about a mile to the next campsite with free spaces.

We set up our tents and made dinner. Then we started a fire and smoked our clothes and hair. Eventually we went to bed; I had my phone so I was able to watch an episode of the Simpsons before falling asleep. Sleeping was rough, but I managed.

In the morning we got up, filtered some water from the creek, and had oatmeal. Then we packed our tents and left the campsite. The hike back was just as easy, and it only took us a few hours to make it back. The couple that had stayed in the campsite next to us had also parked next to us, and unfortunately their car’s window had been smashed the night before. Nick’s BMW was untouched, though.

Back in the vehicles, we stopped in Hood River at a nice cafe for burgers, then drove the rest of the way back to the tri-cities. It was a fun hike, and there were some gorgeous bits of scenery. I was surprised at how much I was in shape for it. Neither the weight of the pack nor the distance we hiked bothered me a bit.