Nick’s birthday was in July, and Carolyn called me to ask if I could pick up the cake for the birthday party. She hadn’t ordered one yet, so I offered to make one instead. I knew Nick loves to go camping and hiking, so I thought I’d make the cake themed around that. I wanted to make an actual mountain cake, and it took me a while to think about how I would do it using regular cake sheets. I had 2 9″ rounds and 1 8×12, so I decided to go with that. I would have the 8×12 as a base, then somehow cut the 9″ rounds to make a mountain out of them. They came out of the oven just in time for me to go to a dinner at someone’s house.

On my way home, I stopped by Winco for some ingredients. I picked up some chocolate ‘rocks’, dried papaya, and gumdrops. Then I started the process. I decided to do two mountains of different sizes, and cut them so that I could maximize use of the cake and have decent looking mountains. The result is the stepped kind of thing, and if I had to do it again I think I’d trim it so that it was more sloped and uneven like a real mountain. I struggled with the frosting. I had made a bunch from scratch, and tried to use food coloring to get a mountain color, but ended up with a brownish green that didn’t please me. Further, there wasn’t nearly enough of it. Fortunately, I had some brown frosting in my cupboard, so I used that for the base and first layer. Then I used the green, then I covered the peaks with my homemade white frosting. Now frosted, I started to add the decorations. I used the chocolate rocks like little boulder fields and large rocks sticking out of the mountain. Some people actually thought they were real rocks. I sliced the green gumdrops into a forest of little trees sticking up. And I carved the dried papaya roughly into a person shaped thing, though it was way out of scale. Finally, I used a tube of blue frosting to show a waterfall down the mountain into a stream that spelled out Happy Birthday.

It was a total of about 3-4 hours of work, and with the exception of the chocolate rocks, the gumdrops, and some of the frosting, was entirely from scratch. 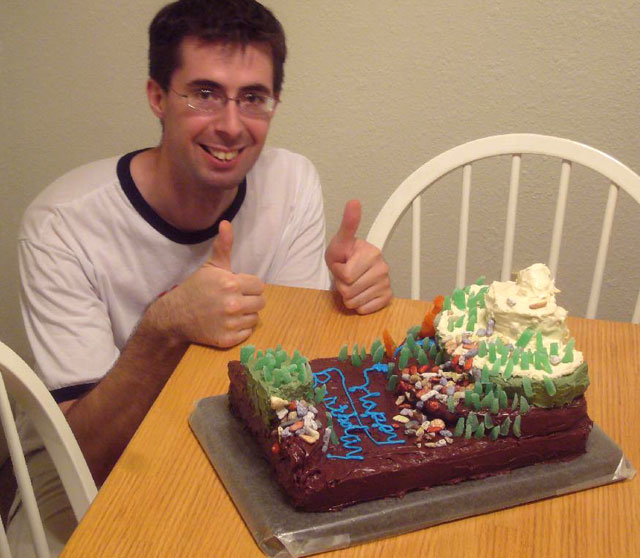 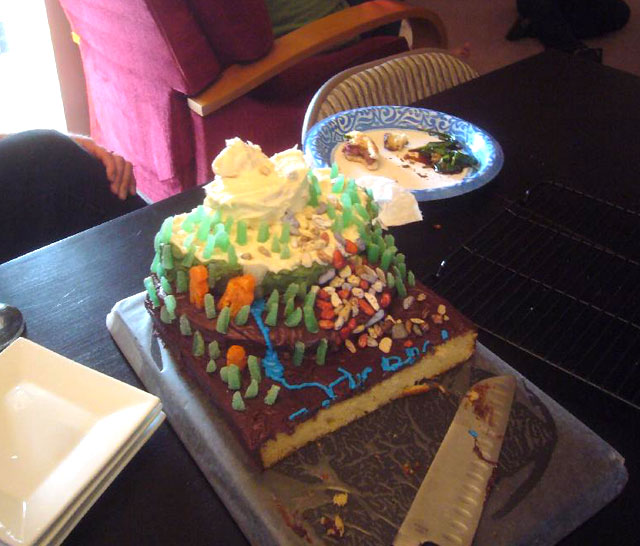