It’s a long story how I got to go to San Diego in August, but short version is that a company that’s interested in licensing some software I wrote for emergency management is paid for me to present with them at a booth at a mapping conference. I was not about to complain about showing off my work or hanging out in San Diego, so I gladly went. Well, tried to go. I got hosed by a canceled flight and had to change plans at the last minute. I was still able to go, but arrived a day and a half later than I expected. Fortunately, my software was designed to work in some pretty unfriendly conditions, so when I did get there, it was only a matter of plugging the USB drive into the server and clicking a file called “GO” and everything was up and running. I had successfully imported their datasets, so we had some interesting stuff to show, and even though my stuff was a web application, it didn’t actually need the web to work, which was fine because there wasn’t any.

For most of the conference I was at the booth. I did wander around the show floor a little, but I stuck pretty closely to my software. In the evenings I mostly went to the hotel to work. I had a lot of other projects going on back home that I couldn’t leave alone, and I was making changes to the emergency management software, too. I always enjoy tweaking my software right before a demo because there’s an element of risk. Of course, I wouldn’t do it if I thought it could screw something up or I didn’t think I could accomplish it in time, but it’s sort of like the ticking clock in movies, where you have a hacker guy break into a system and disable the bomb or transfer the file with seconds left. Anyway, I try not to do that, but I’m not afraid of it.

Back to San Diego, though, I didn’t know anybody there, but I made a few friends anyway. I also checked out a few companies to see if I’m missing out on anything by staying at the lab. And since we have another client down in San Diego, I checked in with them and gave them a new version of the software and walked through it with them.

I did get a chance to get out and see some sights, too. I went out for a couple nice meals, took a tour of the aircraft carrier, and had a great night bar-hopping with my new best friend. We had met at the big conference party completely by chance. There were over 12000 people there, the food, while free, was awful, and the bands, while free, were also awful. I was playing with my phone and waiting for a different band to start so I could get up on my feet and either dance or walk out, and she sat down next to me. We talked for a while, then bailed on the party to find some decent music and drinks that didn’t cost an arm and a leg and tasted a lot better.

This was the view from my very nice hotel room on the 26th floor: 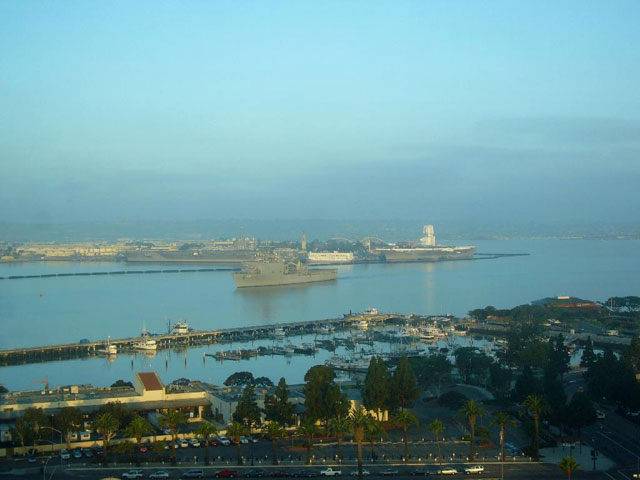