Many people know that I applied to be on the show Beauty and the Geek. This is the full story of what happened.

Back in late 2007 there were a lot of advertisements on the radio about a casting for the show Beauty and the Geek. I had never seen or even heard of the show, so but my interest was piqued. I watched a couple episodes online and was surprised how well the geeks were portrayed. I was not interested in a reality show that made an effort to make the characters look bad, but this one showed the good sides of most of the people on the show. So I thought I’d give it a shot. I went to the casting, which was a local radio DJ sitting and interviewing people in front of a camera. I was one of only a few guys there (there weren’t a lot of girls, either, and a few got turned away because they weren’t 21). I went up for my interview and did fine. I cracked a couple of my signature corny jokes, I told some good stories, and I came across as a smart and likeable geek. Apparently the casting company thought so, too, because a few days later I got a phone call from them asking me to submit an application and video. And I only had a few days before it was due. I raced to fill out the paperwork and make a video and was fairly happy with what I submitted to them (http://wyzgyz.org/batgold). I also sent them a hard copy of the paper work and a dvd of it. Unfortunately, this was during the writer strike, and my mail wasn’t delivered because they wouldn’t cross the picket line. I let the casting people know what had happened and that they could pick up the application at the delivery company, and they thanked me, but never picked it up. It was returned to me a few weeks later. I assumed they had gotten all they needed from the material I submitted online.

I heard nothing, the show was filmed and aired, and frankly I thought I had dodged a bullet by avoiding season 5. There were a lot of quirks that made me glad I wasn’t in that melee.  It was frustrating to not hear anything from them, though, and wonder if or when I would hear from them again and have to tell friends that asked that I hadn’t heard anything.

Then around October out of the blue I got a call from them again. They said they would be starting it up again, filming in December, and I was at the top of their list. They wanted me to make another video, do some paperwork, and have it to them in 48 hours. I understand Hollywood is all about speed, but all my plans for the weekend disappeared in the blink of an eye. I spent a few minutes thinking about what I would do, and finally came up with an idea that I thought would work. The only problem was, I had to act immediately because it relied on other people and they were only there that night. So I went out dancing, and in my haste locked my keys in my car necessitating a call to Carolyn that led to a trip back to my apartment to fetch the spare key. The next day I continued to produce the video, and I finished it up Sunday evening. I had a few people over for a movie night, so I showed it to them for feedback before I submitted it to casting.

Here’s the video in all its glory:

Remember, it was done in only a single weekend, and I didn’t have sophisticated microphones or even anyone else to help with this. I’m particularly proud of what I did at the end with the special effect. You can see words appear above my head while I’m talking. This was not added in afterwards; this is actually projected above me as I’m talking. It took a while to set it up, and there were some technical bits that took some tweaking before I was satisfied. Here’s a shot of my living room so you can see how it was set up: 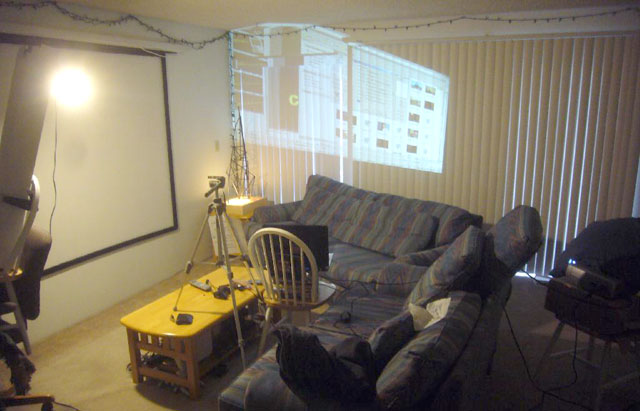 From left to right, there’s a light that I mounted high up using a chair and cardboard. This was to get direct lighting without shadows. Next you can see the camera stand where the camera sat to capture video. Taped to it is a sheet of paper with talking points. To the right of that is the laptop sitting on a chair and a bunch of books so I could see the screen without looking away from the camera. The laptop was running a powerpoint presentation, which is what was projected. You can see in the video some strange skewing on some of the pictures. Because the projector was off to one side, there was some significant keystoning. In powerpoint I was able to correct that in the text by skewing the text the other way, but I wasn’t able to do that with the pictures. On the far right is the projector. I was having audio issues with the projector fan being so loud, so I mostly covered it and put up the cushion barrier. As I talked, I saw what was being projected above me and talked about that and to the talking points on my paper. I had the mouse hidden next to my left hand and hit that to advance slides. Ultimately I think it turned out pretty well.

I submitted everything to them on Sunday night, and you can see it here: http://www.wyzgyz.org/batg/. That page has lots of good pictures and the video.

Over the next couple days we traded a few emails while they got the pictures and higher-def version of the video. Then nothing for a while. Then late in November I got a call again. They asked if I had 5 friends to choose from who could also be on the show, and they said they would probably be moving production back to January. I had a hard enough time taking a month off of work to go do this, and now they were asking for me to find a friend who also wanted to be on the show and could take a month off. I submitted a list of a few names that probably wouldn’t work, and never heard anything again. Nothing. November passed, December passed, and January is half over, and I still haven’t heard from them. Oh well. I’m not really surprised considering what happened last year with it, but it would be nice to hear from them, and it would be nice if they didn’t string me along with “we’re really excited about you and we really want you to be on the show” if they weren’t and didn’t. We’ll see what happens if they make a Season 6 or not, and if I ever hear from them again.