This weekend I participated in a charity event called a polar plunge. The idea is simple. I get people to contribute money towards me doing something crazy, then I go do the crazy thing. Then Special Olympics Washington gets some money. I tried not to campaign too hard around my friends. I dropped a few hints, I mentioned it a few times. I sent out an email to some friends and family, I posted on a bulletin board at work, and the last day I kicked it up a notch and emailed a few people I knew would donate. On my web page for giving the money, I set up a bit of an incentive; the last digit of the amount I raise would be the way I entered, from cannonball to flip to backflip, and even including bellyflop. Of course, everybody tried to keep it at bellyflop, and I was least excited about that one. But at 10am the day of the event, I checked the site one more time and saw that it was at 817, so I had to do a bellyflop. 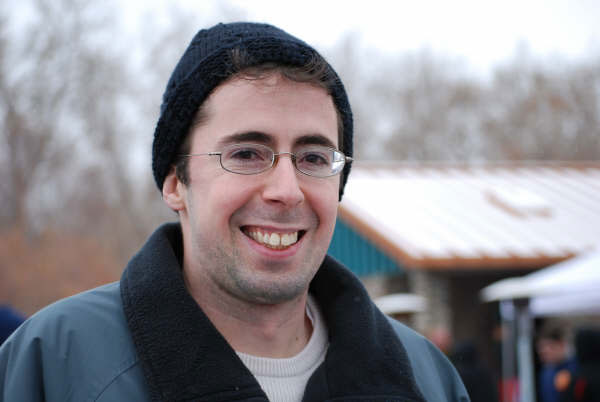 The day of the event I wasn’t feeling too good, so I was really concerned about the flop. Further, the event coordinators really wanted people to just jump straight in. At about 10 minutes before the event, I went into the tent to change clothes. For the last few minutes I wore a bathrobe over my bathing suit. There were a lot of people there, and they were being marched out onto the docks in groups of about 20-25. Then everybody would count down from three, and they’d all jump in, swim back to the boat ramp, and walk up, then get their towels and go back to the tents or the hot tubs that had been set up. The event was hosted by the police and fire departments, and they had all volunteered their time to be there. There were guys in dry suits in the water, ambulances nearby, and lots of people around in case anything went bad. There really wasn’t any danger with so many emergency people there; well, maybe to the rest of the tri-cities.

It came to our turn, and I took off my robe and set it on the hood of an ambulance. Then we all walked down there. I had a hard time finding a place along the dock and ended up towards the end behind someone. They counted down, and everybody jumped. I had to hang back a little because there was a guy directly in front of me, but I jumped as soon as I could: 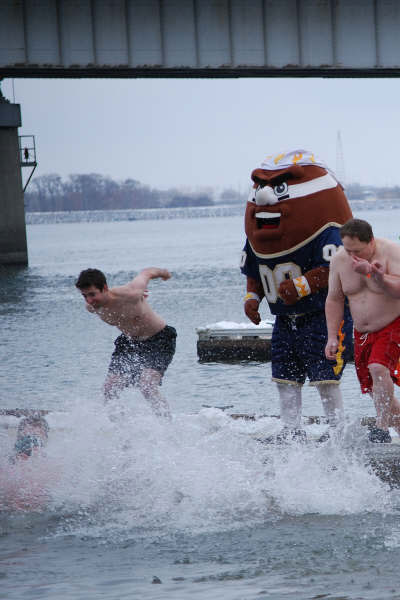 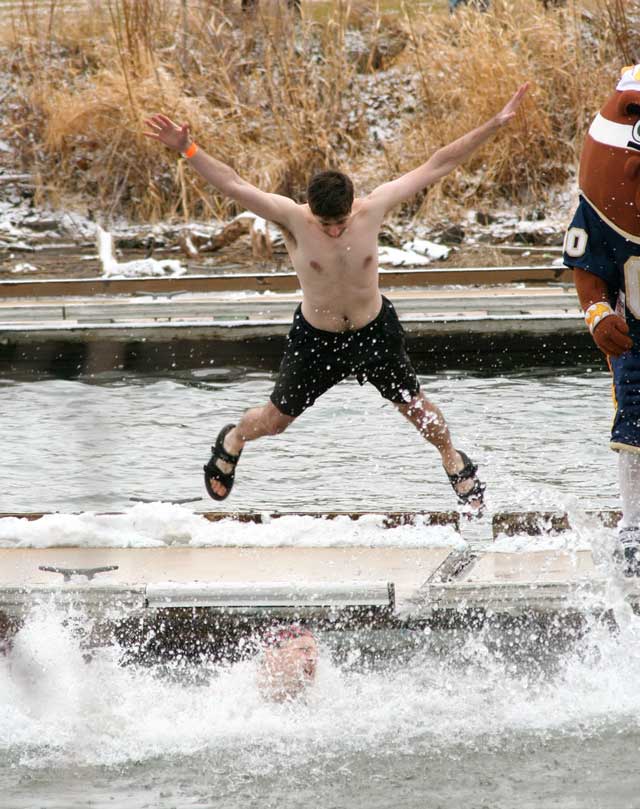 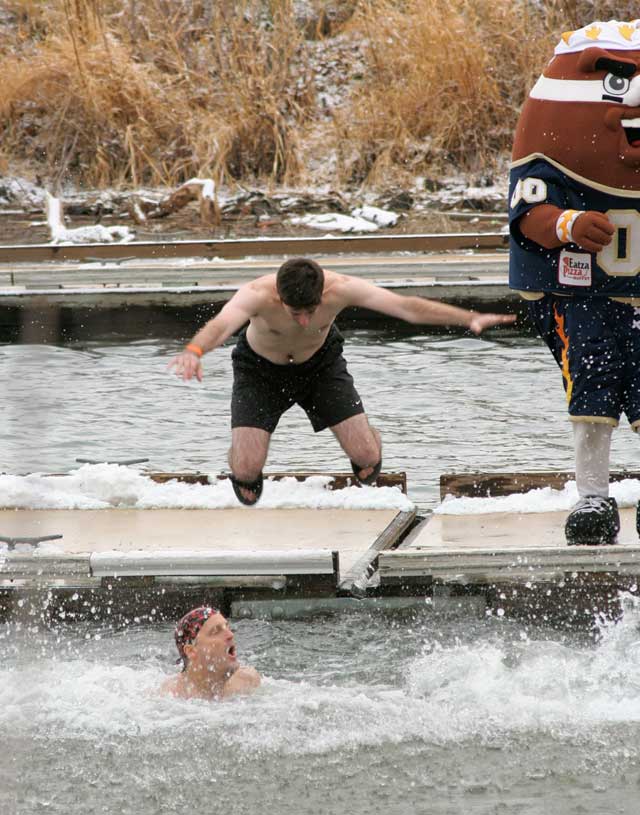 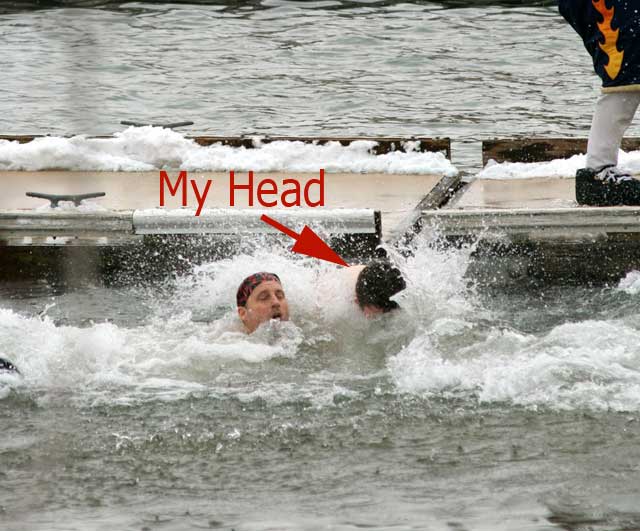 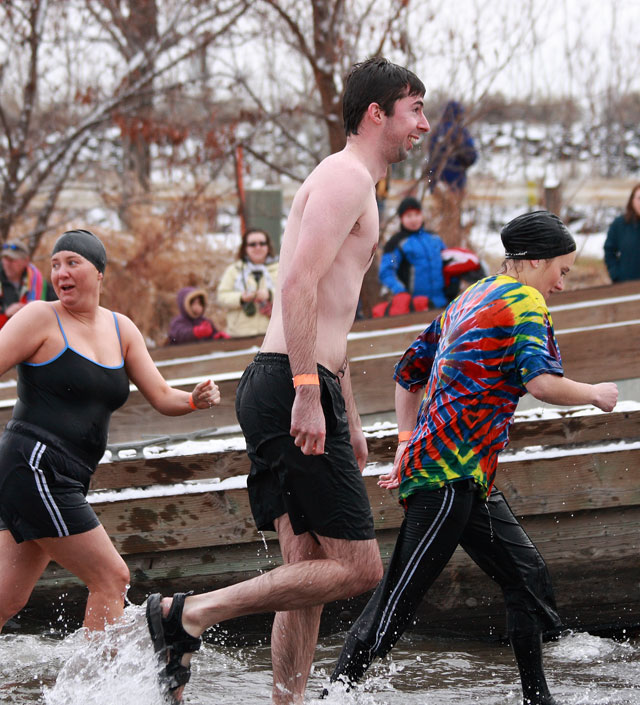 The jump started off perfect. I got spread eagle and was looking forward to the belly flop, but the person in front of me hadn’t gotten out of the way yet, and I barely avoided him. The water was indeed cold, but it was a different sensation than I had experienced during my practice run in the shower the day before. It didn’t feel like cold, but instead felt like my skin was discovering the sense of touch and all of my skin was yelling at me at once. I started to swim immediately for the shore and could only think of how interesting the feeling on my skin was. It was something very new to me. I kept swimming until I noticed that people were wading in thigh-deep water next to me, so I stood up and walked out of the water smiling. I went to my robe, put on my glasses, and walked towards the tent, giving Erin a very cold kiss on the way. There I changed and came back out. I chatted with some friends for a little bit, then headed home.

Overall, it was a lot of fun, and I’m very glad I did it. I got a few contributions afterward, and as of this entry raised $967, which is just a few dollars short of my goal. I’ll definitely do it again next year if I get the chance, but I may have to pretend I didn’t like it so much.