I recently received a pair of ingredients from Erin and was given the challenge to create an original dish with one or both ingredients, name it, and document it. The ingredients were wasabi cheddar cheese, and chili-cocoa powder. I tasted the powder and it was familiar but not extremely appealing. I tried using it as a rub on a pork medallion to see how it would work with other flavors. Again, familiar, but not extremely appealing. Almost done with the pork, I finally realized what it tasted like; mole sauce. Since mole is essentially chili and chocolate, this made a lot of sense. But I still don’t know what to do with it, so I’ll wait on that one.

The other ingredient made a lot of sense to me to use. I was at Safeway yesterday looking for something to eat, and I saw French bread. That triggered an idea for me; open faced grilled sandwiches. So I thought about what would go well on the sandwich with the wasabi cheddar. Obviously I’d need a green filler. I had spinach at home, but I thought sprouts would work better, so I picked up clover sprouts. I got a tomato, too, since that’s a staple for a sandwich. Then I thought about sushi and what goes into various rolls. I picked up an avocado based on that. For a meat, I had some salami at home, but I was a little worried the salami flavor would overpower or conflict with the cheddar. I also had some wasabi mustard at home that I thought about using in case the cheese wasn’t strong enough on its own. I saw a pear, too, and realized it would go perfect on the sandwich. You often have pear, cheese, and bread together. I checked out and headed home.

First, I sliced up all my ingredients: 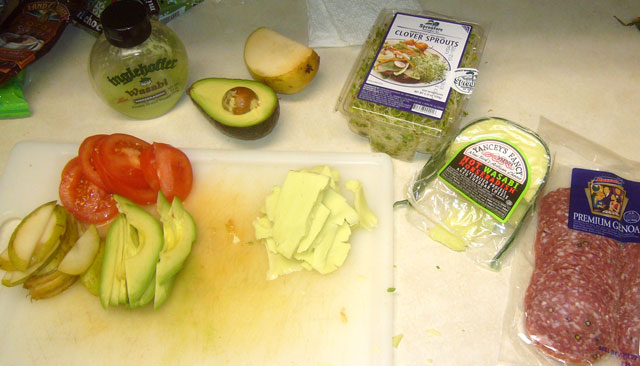 Next, I started the bread. I sliced the loaf and heated some butter in the pan: 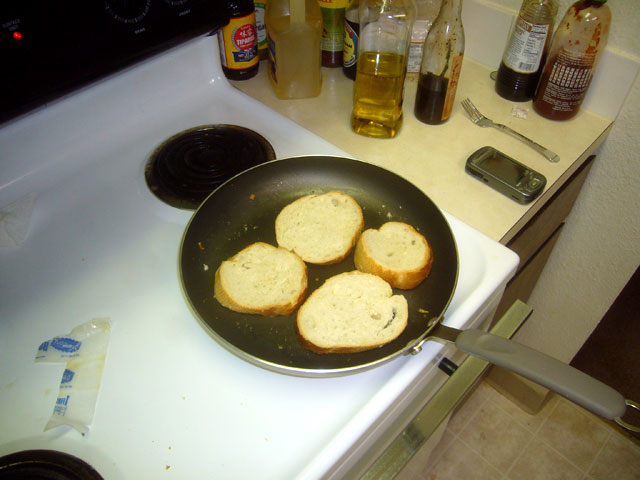 I toasted one side, then applied more butter and flipped the slices. While the bottoms toasted I put the slices of cheese on top to melt. I had to cover the pan to keep the heat in so that the cheese would melt before the toast burned.

Once I was satisfied with the bread, I added the other ingredients. Since this was an experiment, I decided to do 4 different sandwiches with the various ingredients: 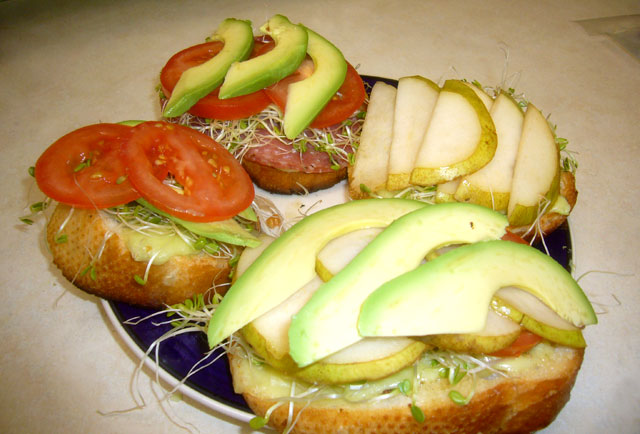 On one sandwich is salami, sprouts, tomato, and avocado, with wasabi mustard as well. This one was really good. I think I would have used less wasabi and a milder meat, like turkey or ham, but it was still a really good sandwich.

The next one was mustard, sprouts, and pear. The pear turned out to be a really good choice, and it was also a tasty sandwich.

Next came the sprouts, tomato, avocado, and pear. This was my favorite. None of the flavors beat out the others, and it was all very good.

By the fourth, I was getting full. Plus, the fourth one had gotten a little too toasty on the bottom. I decided to pick everything off the top and eat just that. It was sprouts, tomato, and avocado, which are all very good, but the sandwich itself wasn’t noteworthy in any respect.

With my four sandwiches made and evaluated, the final part of the challenge was to pick a name. Since my favorite was the third, and it had green avocado, green sprouts, green pear, and greenish cheese, I wanted to give it a name, and incorporate green in the name. Some of the motivation behind the ingredients was from sushi, too, so I could incorporate the name soy perhaps. I think I’ll call it a “Soyless Green sandwich with tomato.” Don’t worry, it’s not made of people. But now I do wonder if I could put some kind of soy sauce in it. That could be pretty good.