We had an interesting problem at work. There’s a display in the main lobby of my building that shows the calendar of all the conference rooms and a map showing where they are in the building. It’s pretty handy for visitors and looks really slick. The problem, though, is night. There’s no point in having the display running 24/7. But the TV has a flaw where it won’t go into sleep mode when the HDMI cable is plugged in, even if the computer itself is asleep and there isn’t a signal.

The solution so far has been for a select few to turn it on in the morning when they arrive and off when they leave. Naturally, this isn’t a sustainable or reliable solution, as it doesn’t take a lot for the system to break down.

So Ian brought me in on the problem to see what I could do with it. I thought about some existing options. An outlet timer would work for turning it off in the evening, but not for turning it on in the morning (it would give the TV power, but not turn it on). I even found an alarm clock that was capable of being programmed to turn on and off a TV, which was really close to what we wanted, but it was discontinued, and reading into the manual it looked like it wasn’t going to work anyway.

I realized I would have to build something. I started off thinking of building off of the Arduino microcontroller board, which I’ve used for other projects and really enjoy using. I spent a day working on hooking up an infrared LED and trying to get it to output a standard on/off signal that the TV would recognize. I also tried to hook up an LCD screen and buttons for configuring the timer, but I quickly got frustrated as each part took way longer than I wanted, and wasn’t getting anywhere.

It made a lot more sense to work with existing electronics and cobble something together. It turned out I already had an alarm clock that I had stopped using in favor of my cell phone, and the alarm clock had two configurable alarms on it. And Ian had purchased for me a cheap universal remote. So I just had to get the alarm clock to trigger the remote control.

This was easier said than done. First I took apart the remote control. I followed the traces back from the on/off button and soldered a couple wires to them, then fed them out the back of the remote through a hole where the battery cover was. Next, I opened the alarm clock and went about trying to identify triggers I could use to determine the alarm state. I was hoping for something simple, like one node being +5V when the radio alarm was on and a different node being +5V when the buzzer alarm was on. Sadly, there was no such luck.

I’ll spare most of the details, but I never found a clean signal I could use. I ended up taking the radio alarm, cutting out the speaker, turning the volume all the way up, and using the speaker wire to drive two relays, which triggered the remote, then also fed to the alarm reset button. That way the radio would turn on, the signal would trip the remote, and it would reset the alarm. That one worked pretty slick.

It was even harder for the buzzer alarm. Not only could I not find a signal, but it didn’t go to the speaker, either. It went to a separate piezoelectric speaker, and the voltage to it wasn’t enough to trip the relays. So I had to build an amplifier circuit that bumped the signal up to something that would trip the relay. But then there was another problem. It was tripping the alarm reset button faster than it was tripping the remote, so it’d reset the alarm before the remote control had a chance, and the TV wouldn’t ever get switched. I fixed this by putting in an RC delay circuit on the alarm reset relay.

I put it all back together and tested it out. It’s in my apartment, so I had to try it out on the VCR (I had to take it out of its box), but it worked. The alarm clock dutifully turned off and on the VCR at the right times.

I’m bringing it in to work tomorrow to see if it’ll work on the intended television. It’ll probably sit on a counter across the lobby and point at the TV, and definitely have a sign that says what it is so people don’t get suspicious.

Here’s a picture of the completed project. I won’t show the insides because I’m a little embarrassed of the circuit. I could have done a much cleaner and more correct design, but it works now, so I’m happy. I hope people at work appreciate it, too. 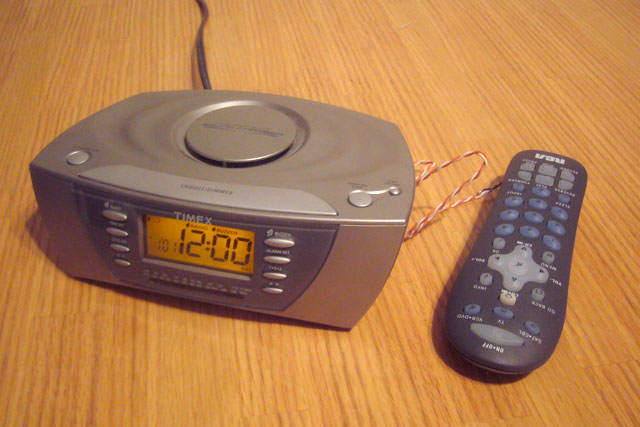