Saturday I had a party for work, so I thought I’d throw together a cheesecake. I used the recipe I’ve used a few times in the past. Better Homes and Garden, by the way. Rather than melt some semi-sweet chocolate, I went instead with a bottle of Hershey chocolate sauce. I was getting to the bottom of the bottle, and I noticed that as I squeezed it would spatter out in neat randomness. So on top of the swirled cheesecake filling I sprayed the sauce, not realizing that it would ultimately be the cause of a huge problem.

The cake cooked fine, and after I took it out of the oven it still looked good, but the spots where there was sauce looked a little weak and were starting to crack. When the top of a cheesecake begins to crack, the cracks turn to crevasses as it cools down, and that’s exactly what happened. There were three pretty big cracks as it cooled. I looked around for something to fix it and found a block of milk chocolate that Erin had given me. I thought I’d shave chocolate onto the top to see if it would cover up the cracks. But the chocolate shavings weren’t as silky smooth as I thought, and they broke up into smaller pieces than I expected. It was time to go to the party, so I made the decision not to bring the cheesecake. That turned out to be ok, though, because there was already a lot of food there.

Aesthetically, the cheesecake was mediocre. It tasted great, though. Here’s a picture, but remember, it only looks average; it’s too bad I can’t make the web lick-able. 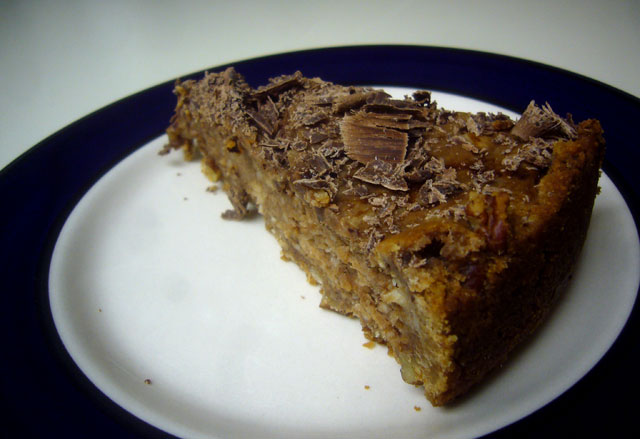